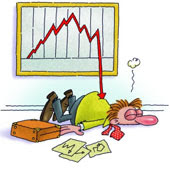 With over 1,000 ETFs now being on the market, there are bound to be some that simply don’t make it and end up folding shop.

So what do you do if you get stuck with an ETF that is about to liquidate?

Here are some thoughts on that topic in “How To Survive An ETF Liquidation:”

The last two weeks have seen two separate announcements of ETF closures, with Claymore and Grail both making plans to shutter funds that have failed to catch on with investors. Claymore will close four equity funds that maintained aggregate assets of about $35 million (IRO, CRO, EXB, and ROB) while Grail is closing the doors on two actively-managed funds that each maintained about $3 million in assets. So far in 2010, about 30 ETFs have been closed; WisdomTree gave 10 funds the ax in February and Rydex pulled the plug on most of its leveraged ETF lineup in April.

Odds are that the next several years will see a wave of consolidations and closures in the ETF space. According to the most recent data from the National Stock Exchange, more than 350 ETFs maintain total assets of less than $25 million. Many of those funds are relatively new, and are just hitting the sweet spot on their growth curve. GXG is a good example of an ETF that grew up slowly; the Colombia ETF launched in early 2009 and as recently as June 2010 had just $13 million in assets. In the two months since, assets have surged to more than $50 million [see The Colombia ETF’s Secret Sauce].

But many ETFs with under $25 million in assets are unlikely to ever generate significant interest from investors, and many are likely operating in the red (the exact breakeven point obviously depends on the expense ratio and other details). Since ETF issuers don’t like losing money, that means that hundreds of funds could be headed to the big trading floor in the sky.

The process for winding down an ETF is generally very similar across different issuers. A final trading day is announced, and shareholders in the fund after that date will have their shares automatically redeemed for cash on the last day of operations. So investors in a fund that is shutting down generally have two options: 1) sell shares ahead of the final trading day or 2) hold on to the shares until the final cash distribution is made [also read Myths About ETF Liquidity].
…

There’s another risk for investors who elect to hold on to their position until the ultimate cash distribution. “As a fund sells its last positions, it has the potential to realize capital gains if any of the positions have appreciated,” writes Matt Hougan. “Any gains are then distributed along with the cash proceeds to redeeming investors.” Such a scenario potentially eliminates the tax efficiency advantage that ETFs boast over mutual funds, and leaves investors with unwanted capital gains. Of course selling shares in the days leading up to the closure of an ETF can also lead to investors incurring capital gains.

Each liquidation scenario is different; trading premiums/discounts, treatment of closing costs, and potential capital gains can change the strategy for navigating the final few days of an ETF’s life. If you’re able to close out of the position at the NAV and without incurring unwanted tax consequences, it probably makes sense to do so and avoid any uncertainty as the shuttering approaches. If not, it’s time to measure the costs of each scenario and determine the best path.

To me, the way to solve that issue is not to get involved with an ETF in the first place, if it might face an early demise. How can you be certain?

While you never can be 100% sure, a clue would be the size of an ETF and its daily trading volume. There are a host of ETFs that remain tiny even after a year on the market. Others may grow in size but volume remains puny and bid/ask spreads are high.

In the final analysis, the tiebreaker as to whether an ETF is worthy your attention, or is simply in survival mode, should be average daily volume. In my advisor practice, I have filtered out any ETF with less than an average daily volume of $10 million. After removing redundancy, I ended up with a list, which contains only 81 ETFs.

That covers just about all areas of the investment spectrum and leaves me only with those that are established and therefore have very little chance of facing liquidation.