Yesterday’s rally, which was entirely powered by hope for a U.S./China trade resolution, came under pressure today, after an early follow through ramp petered out in the afternoon with the major indexes heading straight south into the red scoring modest losses.

Pessimism replaced optimism as uncertainties over trade policy and geopolitical issues took center stage. Responding to reporters if he was happy with the current state of the trade talks, President Trump responded with “not really” and that negotiations “have a long way to go.” Not exactly the kind of ‘progress’ report markets had expected, and down we went.

Adding fuel to the fire were reports that in regards to the upcoming historical meeting between Trump and N. Korea’s Kim Jong Un, Trump said that such a meeting may happen later than currently scheduled. That was followed White House headlines that any new nuclear deal with Iran would be subject to a list of demands.

None of these developments were soothing to Wall Street traders, who adopted a wait-and-see attitude. All of the above mentioned events really don’t have any major direct economic impact, but are more of a psychological nature causing uncertainty and keeping markets stuck in a broad range. 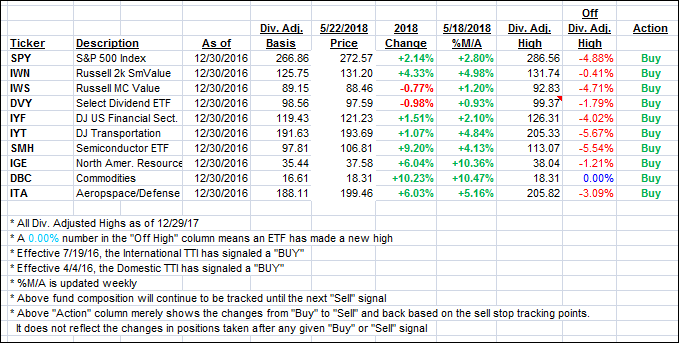 Our Trend Tracking Indexes (TTIs) were mixed with the Domestic one slipping and the International one gaining a tad.