The Dow was the weakling of the day as IBM got spanked at the tune of -7.53%, which equaled a loss of 84 points on the Dow. We had a positive opening, followed by a dump and pump and a soft slide into the close with 2 out the three major indexes managing to end in the green by a tiny margin.

Energy (XLE) made up for some of the weak sectors by gaining +1.56% joined by Transportations (IYT +1.77%), whose performance is widely recognized as a bullish indicator. So far, banks are suffering despite good results with the Banking index (KRX) losing another -0.58% and honing in on early April lows. Financials (XLF) joined the club and gave back -0.44% despite solid earnings.

IBM was the center of attention with its sharp drop in stock price, which was its worst one-day decline since April 2013. Its earnings beat was the result of fancy accounting driven by a one-time tax gain.

In other news, the Fed’s Beige Book release did not affect markets, as its economic activity was shown to remain at a modest to moderate pace. Interest rates reversed and jumped with the 10-year bond yield gaining 5 basis points to end at 2.87%. So did the US Dollar (UUP) which, despite a volatile session, rose +0.21%. 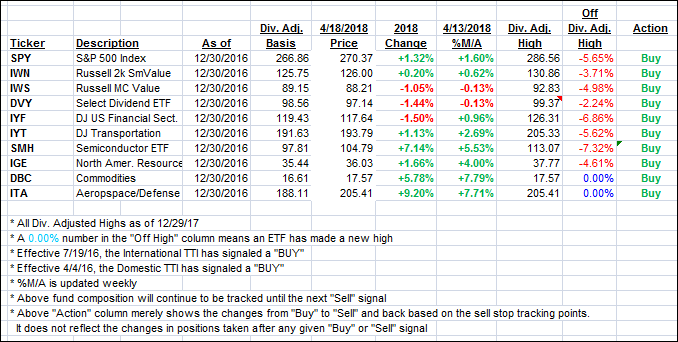