Stocks snapped a two-day losing streak despite the anticipated news that the economy shrank 2.9% in the first quarter. The S&P 500 gained 0.5%, the Dow rose 0.3% and the Nasdaq posted the largest gain of 0.68%.

The general sentiment about the lackluster first quarter mostly relates to the ‘arctic’ winter that blasted the mid and eastern part of the U.S. So, this leaves many optimistic that the economy should keep trucking ahead on an upward climb given the positive economic data on manufacturing, hiring and auto sales for the past two months.

Barnes & Noble (BKS), the struggling bookseller, saw its shares jump up 8% Wednesday after reporting that it will spin off its Nook digital book business. The Nook business will be spun off into a new publicly traded company called Nook Media, is 17% owned by Microsoft (MSFT) and 5% owned by publisher Pearson (PSO).

We also saw shares of CBS (CBS) gain 6.19% today after the Supreme Court ruled that Aereo’s streaming TV service is a violation of Copyright laws. Disney (DIS), Time Warner (TWC), and Comcast (CMCSA) stocks were all up after the ruling came down. 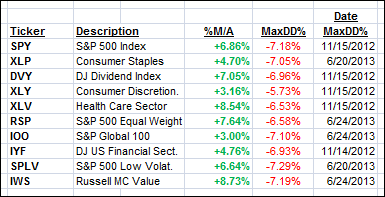 All of them are in “buy” mode, meaning their prices are above their respective long term trend lines by the percentage indicated (%M/A).

Our Trend Tracking Indexes (TTIs) recovered and headed back north closing as follows: