U.S. stock indexes posted their largest decline in three weeks on the first trading day of 2014, after the benchmark S&P 500 finished its best year since 1997. Oil and gas producers were among the hardest hit following a 3% drop in oil prices to under $96 a barrel as Libya prepares to reopen a major oilfield. The dollar rallied though against a basket of major currencies (DXY) as U.S. jobs, housing and manufacturing data gave support to the Federal Reserve’s decision to start slowing its stimulus program this month. This was the dollar’s largest daily gain in five months against a basket of currencies.

Across the pond, the euro fell 0.7 percent against the dollar to $1.3654, touching a two-week low of $1.3628. It might be hard to believe, but Europe’s common currency was the strongest-performing major currency in 2013. Historically though, the euro has tended to weaken at the start of a calendar year.

Perhaps the most positive news as we begin 2014 is that U.S. factory activity remained at a 2-1/2-year high in December and the number of Americans filing new claims for jobless benefits fell again last week, suggesting the world’s largest economy is on stable footing.

Checking in on gold- and precious-metals and mining funds during a gold-bullish kickoff to the New Year, SPDR Gold Trust (GLD) and iShares Silver Trust (SLV) are gaining 1.8% and 3.2%, respectively. Market Vectors Gold Miners ETF (GDX) is ahead by 3.6%.

With the major indexes pulling back today, our 10 ETFs in the Spotlight followed suit as they all came off their recent highs to varying degrees. Take a look at the YTD table below. 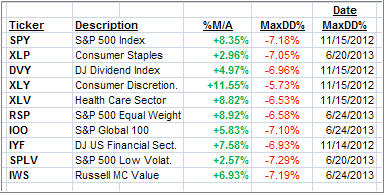 Our Trend Tracking Indexes (TTIs) pulled back as well but remain above their long term trend lines by the following percentages: