The S&P 500 along with the Dow Industrials kept its upward momentum intact during this last trading day by closing out this year at new record levels. As it stands, the Fed’s decision earlier this month to start tapering was taken as a positive, which helped the indexes to keep the rally going.

Of course, the Fed’s action was speculated on and anticipated throughout this year, so by the time the trigger was actually pulled, it no longer was a surprise, and the markets handled it in stride despite a momentary sell off.

The strength of equities was surprising given the fact that bonds hit the skids earlier this year, slipped into bear market territory and never recovered in any meaningful way. Lots of speculation abounds about what the markets will do next year. My suggestion is that you pay no attention to these exercises in futility and focus on the the long-term trend. Combine the direction of the trend with my recommended sell stop discipline, and you can eliminate much of the guesswork as to what might or might not happen.

With the continuation of the current upside momentum in equities, nine of our ten ETFs in the Spotlight made new highs today. Take a look at the YTD table below. 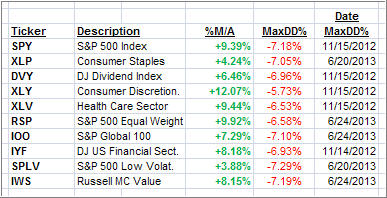 Looking at the big picture, our Trend Tracking Indexes (TTIs) continue to advance with the overall positive tone in the market and remain above their long term trend lines by the following percentages:

At this time, I like to wish you a Happy New Year!