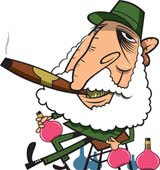 Bill Fleckenstein presented these interesting economic thoughts a few days ago in “Cuba understands what US doesn’t:”

As even the Cuban government lays off workers, we can’t seem to face the looming problems posed by our own bloated public payrolls.

It might seem obvious, but one of the fundamental rules of investing is “don’t lose money.” That rule is also one of the more important and unnoticed casualties of the Greenspan-to-Bernanke era at the Federal Reserve.

Why? Because once you stop worrying about loss of capital, lots of bad things can happen (in addition to losing money).

For those who need proof, just look at our two most recent asset bubbles. People and companies got up to a lot of mischief and were usually not worried that they might lose money. A lot of them behaved accordingly, which is to say, recklessly.

And why wouldn’t they? After all, they were encouraged to act that way. And nobody did more to convince people they shouldn’t worry about taking advantage of the bubble du jour, be it tech stocks or real estate, than Alan “What, Me Worry?” Greenspan.
…

As regular readers know, I think one of the best ways to protect yourself, against numerous threats on multiple fronts, is to own gold. Although I have not been too focused on it in the past, one of those threats — and therefore another reason we need protection — is the big problem this country faces with regard to the bloated structure of local, state and federal governments.

In my Aug. 13 column, I talked about the potential for class warfare between average citizens who are struggling and government workers who have the chance to retire on extremely generous pensions. In other words, there is going to be a clash between those struggling in the private sector and those living relatively fat off public money. What I had not realized until recently was just how out of control the numbers had become.

In a newsletter this month, Dennis Gartman shared some data on the subject, which I found very illuminating: In 1949, government spending was 14.3% of gross domestic product. As of 2009, it had risen to 24.7% of GDP (and is obviously higher now). In other words, since 1949, that percentage has grown 73%. Given the problems the country faces, this is something that will have to be addressed somewhere down the road.

More importantly, it isn’t just defense spending (as some would like to believe) that is the source of the increase. Gartman pointed out that in 1949, defense and international aid constituted 7.1% of GDP, while federal payments to individuals were just 3.7%. Today, only 4.9% goes to the former, while 14.7% is directed to the latter.

I suspect one thing the left and the right might be able to agree on is that it does not do anyone in the private sector any good to have a public sector that is bloated to such absurd levels.

Even communist Cuba has been forced to figure this out, as front-page articles in the Sept. 14 print edition of The New York Times (“Cuba’s public-sector layoffs signal major shift”) and the Sept. 15 print edition of The Wall Street Journal (“Cuba to cut state jobs in tilt toward free market”) made clear. Facing essentially the same problem that we do, the Cuban government plans to lay off 500,000 workers in hopes they will move over to the private sector. As the Cuban Workers Federation said in a statement quoted in The Journal: “Our state can’t keep maintaining . . . bloated payrolls.”

Neither can the United States. And if a communist government like Cuba can admit it and make changes, why can’t we?

Yes indeed, why can’t we? The goal of any government in my view should be to run a country with the greatest amount of effectiveness and efficiency and at a minimum cost to the public.

While very likely politicians on both sides of the aisle would agree with that assessment, it is far easier and politically safer to stay with the status quo and not rock the boat. In other words, it’s business as usual.