Stocks rallied as the Nasdaq closed at a new record high after the Federal Reserve opted to leave interest rates unchanged but stressed that the case for a hike in rates has “strengthened”.

In its statement, the Fed said the “case for an increase in (short-term) rates has strengthened” but that the Fed “decided, for the time being, to wait for further evidence of continued progress toward its objectives” of full employment and inflation moving back up to its 2% target. The announcement to hold interest at bay came as no surprise, and the hint at a possible hike in December is in line with most analysts’ expectations.

The biggest losers after the news from the Fed today?  Bank stocks. Eight of the Ten worst performing stocks today included lender Navient (NAVI), Regions (RF) and Vank of America (BAC). Those invested in bank stocks have been hoping the fed will boost rates sooner than later, giving the banks a chance to charge more for loans before the demand for loans decreases. It looks like they will have to wait until December.

Crude oil was a big winner today. The black gold climbed $1.57 to close at $45.62 a barrel. While the daily gain is notable, the fact that oil still remains in limbo between $40-50 a barrel is giving investors a headache. Just four months ago, many thought that oil would climb over $50 a barrel and remain there after the summer. However, that never happened. Over-supply still remains the name of the game in the world of oil and it doesn’t seem that will change anytime soon.

In regards to interest hikes and the Fed crying “wolf” again, the following is a spot on demonstration of where we are at. 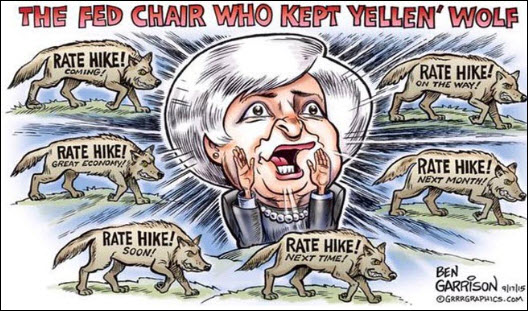 Our Trend Tracking Indexes (TTIs) jumped as the Fed remained accommodative by leaving interest rates unchanged. Let’s wait and see if this was only a euphoric reaction or the beginning of a more sustainable rally.