Stocks slipped into negative territory today, driven lower by the latest release of the Fed Minutes. The minutes showed that some Fed policymakers favored eliminating a pledge to keep interest rates near zero “for a considerable time” but others worried that such a move could prompt financial markets to push up rates prematurely. The major indexes pulled back slightly, as the chart above shows.

There was a notable amount of buzz today regarding speculation as to whether or not the S&P 500 can reach the 2,100 mark by the end of the year. At present, the index is just 52 points away, and many analysts believe there is still room to run over the next month.

In the world of earnings reports, retailers were in focus today. Target (TGT) and Lowe’s (LOW) both reported earnings that topped Wall Street estimates. Shares of both companies gained more than 5%. Staples (SPLS) also reported higher earnings today, and the stock surged 9%.

2 of our 10 ETFs in the Spotlight gained on the day while making new highs at the same time as the YTD table below shows. 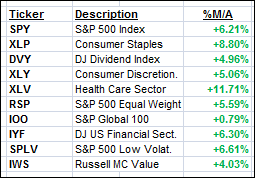 Our Trend Tracking Indexes (TTIs) both slipped immaterially as the major indexes bounced aimlessly slightly below the unchanged line.

Here’s how we ended up: