European equities headed higher supported by strong readings on factories and hopes that the ECB may take additional easing steps. That proved to be a springboard for the domestic indexes which, after an early rally, pulled back and then slowly inched their way higher with the DIA reaching a closing high.

Again, it seems the path of least resistance is up if there is no specific news to the contrary. Leading the ETF pack were utilities (XLU), which gained over 1.36% followed by consumer staples (XLP) with a strong 1.08%.

Analysts in general consider the current environment bullish for equities due to a positive third quarter earnings season, along with positive investor sentiment caused by the assumption of the Fed holding off on tapering until March. Nevertheless, it pays to be cautious, especially in view of the widespread complacency in the market place.

It features 10 broadly diversified ETFs from my HighVolume list as posted every Monday. Furthermore, they are screened for the lowest MaxDD% number meaning they have been showing better resistance to temporary selloffs than all others over the past year.

In other words, all of them never triggered their 7.5% sell stop level during this time period, which included a variety of severe market pullbacks but no move into outright bear market territory. 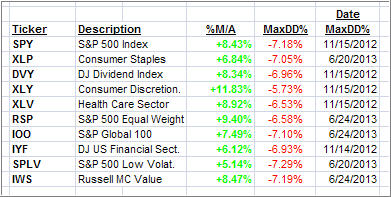 The recent sell off in the month of June did not affect XLY at all as its “worst” MaxDD% of -5.73% still stands since the November 2012 sell off.

The 0.00% in the Off High column means that this ETF has made new highs for the year, which is a sign of strong upward momentum.

Trend wise, our Trend Tracking Indexes (TTIs) headed back up and remain above their long term trend lines by the following percentages: