Despite the markets closing fractionally higher from a week ago, more slippage and juggling around the cutline was evident. The position improvements were minor with heavyweight TMW (Wilshire 5000) inching back to +4 from last week’s -3.

VTI (Total Market Index) dropped in from a level above +20 and slipped below its line to a -4 position. VUG (Vanguard Growth) rallied somewhat to settle at -9 from a previous -15.

However, take a look at the %M/A column, which clearly shows that the breaks above and below the trend line are occurring at fractional percentages, which means that any move in the market can easily reverse their current positions.

Nevertheless, momentum continues to weaken and is bringing more ETFs to the verge of breaking their respective trend lines and moving into bearish territory. At the same time most of their trailing sell stops (DD% column) have been or are close to being triggered.

Take a look at the table, and then I’ll review again the most watched trend line this upcoming week: 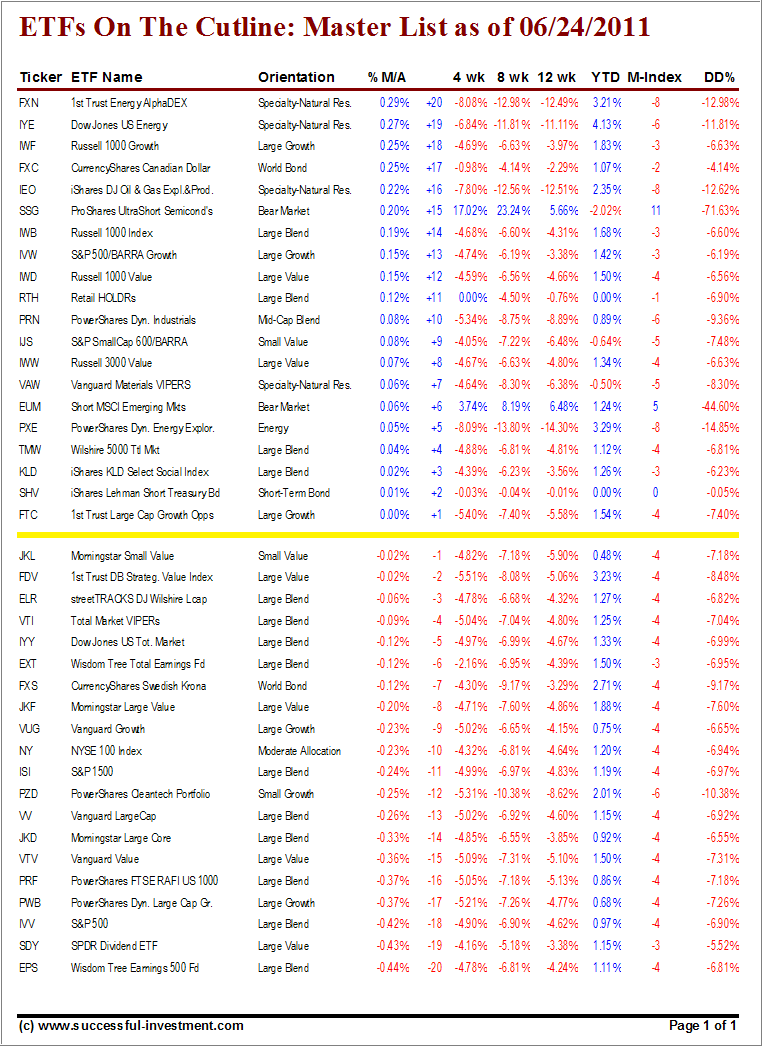 During the wild swings of the past week, the S&P 500 had touched its 200-day moving average on several occasions, but so far has managed to bounce off that level successfully. I recalculated that number to be 1,263.47, which means that, as of last Friday’s close, the index hovers only +0.39% above it.

Repeated testing of a support level will eventually lead to a break, which will invite more selling, especially since this technical indicator is widely watched. As a result, our domestic TTI is sure to follow once this happens.

We could very well see a little bit of a rebound this week due to quarter ending ‘window dressing’ by portfolio managers. Be sure to tune into the blog for the latest updates.

Reference: “How do I use the ETF Cutline Table to make a Buy decision”