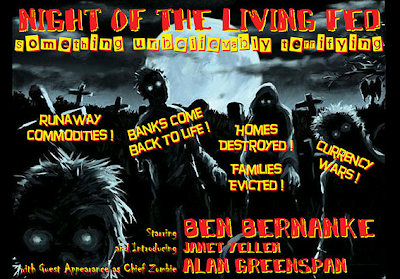 In case you missed it, MarketWatch reports that “Fed zombies are hungry for quantitative easing:”

The easy-money policies of Federal Reserve chairmen Ben Bernanke and Alan Greenspan have rarely impressed veteran fund manager Jeremy Grantham, but now the chief investment strategist at GMO, a Boston investment firm, is likening Fed actions to an economic horror show.
“Adhering to a policy of low rates, employing quantitative easing, deliberately stimulating asset prices, ignoring the consequences of bubbles breaking, and displaying a complete refusal to learn from experience has left Fed policy as a large net negative to the production of a healthy, stable economy with strong employment,” Grantham wrote in his latest quarterly commentary, “Night of the Living Fed.”

In a scathing indictment of the Fed, Grantham casts Bernanke as a desperate zombie whose manipulation of asset prices through lower interest rates — exacerbated by a widely expected second round of quantitative easing beginning next month — weakens not just the U.S. economy but also destabilizes currency and commodity markets.

Moreover, Grantham alleges, artificially stimulated asset prices encourages risk-taking investment behavior that can lead to asset bubbles that invariably end badly, as was the case with Internet stocks and housing.

The Fed has been inflating asset prices as part of policy since at least the mid-1990s. The wealth effect is the primary mechanism, make people richer and they’ll spend more. So QE is there to goose asset markets. But this’ll end badly. And the next time the Fed won’t have any silver bullets left to kill recession.

In his commentary, Grantham is especially harsh with former Fed Chairman Greenspan. “The net effect of deliberately encouraging the start of asset bubbles — particularly in the case of housing — and then neglecting them and leaving them to burst, created the worst domestic and global recession since 1932,” Grantham said.

“Capitalism has been manipulated far more, and more dangerously, by the last two Republican-appointed Fed bosses than everything else added together,” Grantham added. “It is naive, if fashionable, to blame the rather current lame Administration for all of our problems. They inherited a cake already baked, or better, ‘half-baked,’ and the master bakers were the current and former Fed bosses.”

Grantham doesn’t stop there. The real victims of “Fed Manipulated Prices,” he said, are individual savers.

“When rates are artificially low, income is moved away from savers…toward borrowers,” Grantham said. “This means less income for retirees and near-retirees with conservative portfolios, and more profit opportunities for the financial industry.”

Nowhere to hide; somewhere to invest

Yet stock investors, ironically, can find hope in this bleak picture, Grantham said.

The biggest reason is that 2011 is the third year of the four-year Presidential Cycle, a historical phenomenon in which not only stocks do well, but high-risk stocks fare best of all.

In year three of the cycle, “risky, highly volatile stocks have outperformed low risk stocks by an astonishing average of 18% a year since 1964,” Grantham noted.

Plus, the third year of the last 19 cycles — over a span of almost eight decades — has not seen a serious bear market since the 1930s, and in the one year of the 19 that was down, the market lost just 2%.

Accordingly, Grantham wrote, “the line of least resistance is for the market to go up and for risk to flourish,” with the Standard & Poor’s 500-stock index possibly reaching 1500 a year from now.

“Of course, if we get up to 1400 or 1500 on the S&P, we once again face the consequences of a badly overpriced market and overextended risk-taking,” Grantham cautioned.
…

Stocks are overpriced, but bonds are even less attractive, Grantham said. Gold, meanwhile, isn’t for serious investors, he added. “In the longer run,” he said, “resources in the ground, forestry, agriculture, common stocks and even real estate are more certain to resist any inflation or paper currency crisis than is gold.”

I agree with Grantham’s analysis of the Fed’s easy monetary policies, and the bubbles it has created. What amazes me is that the upcoming QE-2 injection is supposed to cure all that ails the economy; at least those are the expectations.

One only has to look to Japan and their two lost decades to see that stimulus in its various forms did not and never will bring about the desired results. That fact seems to have been lost on the Fed being hell-bent on doing something…

Grantham refers to the third year of the last 19 election cycles not having seen a serious bear market in almost eight decades. While that is an impressive statistic, I want to point out that we are also in unchartered territory by never having been on the back side of a real estate/credit bust of such gigantic proportions with still unknown long-term consequences.

If Grantham is right, and the S&P 500 heads higher based on current fundamentals, the eventual pullback may very well be even more severe. It’s all a guessing game, so to me the sensible thing is to always have an exit strategy in place, such as I advocate. If you don’t, you will leave your portfolio exposed to the vagaries of the market place.