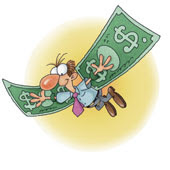 Occasionally, I have posted about a no load mutual fund that should belong in every investor’s portfolio, even if your general preferences are the use of ETFs.

The WSJ reports in “Permanent Portfolio (PRPFX): How a Forgotten Fund got Hot in a Hurry:”

I’ve been following the ‘permanent portfolio’ theory on and off with one eye for a few years, and it’s actually been quite an interesting performer. Especially the past few years with the 2nd massive bear market in a decade in equities, combined with a multi decade bull in bonds (only accelerating of late), and the decade long surge in gold. It is championed by Harry Browne – a quick overview.

* The general idea of this approach is that there are four basic classes of investments investors should primarily concern themselves with: stocks, Treasury bonds, cash (Treasury bills), and precious metals. He did some analysis of past trends in those markets and discovered that a portfolio consisting of equal parts of each of those four types of investments was not terribly volatile and had a relatively consistent rate of return.

* Of course, such a portfolio would never do as well as one that was over-weighted toward whatever investment was going to go up in the next time period, but unfortunately that information is not available when you need to know it. This approach, on the other hand, does not require precognition, but just some simple mechanical adjustments whenever one of the portfolio segments gets out of balance with the others.

There is a mutual fund that follows this style called (shockingly) Permanent Portfolio (PRPFX) and it’s turned into the latest hot money fund, with assets now surging close to $8B! The performance considering the lost decade in stocks has been stellar… [Feb 5, 2009: Mutual Funds Have Tough Decade] but obviously if we looked at it a decade ago when any mutual fund not chock full of tech stocks was considered a loser, it would have looked like a serious laggard!

The Wall Street journal has a story on this tortoise that beat the hares. A quite amazing story – in August of this year the fund received more inflows than it did in its first 25 years combined!

There is more information contained in the above link, so be sure to click through if this fund is of interest to you.

We have had holdings in PRPFX for quite some time and, during the past buy cycle (since 6/3/09), it was the only fund/ETF that never reacted poorly to market pullbacks and consequently never caused a whip-saw signal.

This fund lends itself perfectly to trend tracking but the name is a bit of a misnomer. While indeed it held up better than most during the 2008 massacre, you would have been better off selling it as per our trend tracking exit strategy. Nevertheless, it comes as close as I have ever found a fund to be “permanent.”

Here is the testing methodology I used:

1. Buy PRPFX on 12/31/1999
2. Hold it until the 7% trailing sell stop takes you out of the market
3. Re-invest as soon as the price has risen again by 3% above the price you were stopped out of
4. If you get stopped out again, use the same reinvestment process

Here’s the important part. Because of PRPFX’s lack of volatility, you only would have been stopped out “four times” in 10 years. While this does not represent true trend tracking, it nevertheless demonstrates that the tortoise can beat the hare.

I tested a variation of the above by allocating 50% to PRPFX and 50% to a bond fund (VBMFX) and applied the same principles over the same period. This combination returned a total of +93.88%. While PRPFX again had 4 buy/sell signals, the bond fund had none.

Again, this is merely meant to be a demonstration and not any guarantee that similar performances can be repeated in the future. However, it clearly shows that you don’t have to be in the hottest fund or latest ETF to outperform the S&P 500 or just about any other fund.

The key to this success was clearly the fact the major downturns were avoided, which to my way of thinking is the number one portfolio wrecking ball. Moderate upside along with bear market avoidance will give you better odds at long-term success.

I will continue with my back testing efforts using all past trend tracking buy/sell cycles and will share the results with you once I have them.

Disclosure: Holdings in above funds