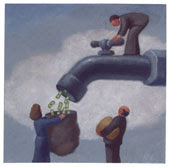 After Schwab had thrown down the gauntlet a few months ago by offering a small menu of commission free ETFs, it was only a matter of time before someone else picked it up. MarketWatch reports in “Big brokers cut commissions to draw ETF assets:”

Online brokers are fighting hard for a greater share of the fast-growing exchange-traded fund business, and investors stand to benefit from lower costs.

Two of the nation’s largest brokerage platforms are allowing customers to buy and sell some exchange-traded funds for free in a bid to attract business. The move could compel rivals to follow suit, encouraging investors to buy and sell ETFs.

The Boston-based investment giant also cut U.S. online stock-trading commissions by as much as 60% to a flat rate of $7.95 a trade.
…

Fidelity’s alliance with ETF heavyweight BlackRock Inc. could mark a major milestone for the business. Fidelity is allowing customers to trade 25 iShares ETFs from BlackRock for free.
…

Some analysts said Fidelity’s move could be a response to Charles Schwab Corp. launching its first proprietary ETFs in November with commission-free online trades for Schwab clients.

Schwab’s eight ETFs had slightly more than $570 million in assets under management as of Feb. 3, said spokesman David Weiskopf.

Fidelity launched its first and only ETF in 2003, the Fidelity Nasdaq Composite Index Tracking Stock. It had about $127 million in assets at the end of January, according to Fidelity.

“Our customers have been showing an increasing interest in ETFs,” said James Burton, president of Fidelity’s retail brokerage business, in an interview.

He declined to discuss the financial details of the deal with BlackRock other than to say it was a multiyear marketing agreement. Burton also declined to comment on whether Fidelity plans to grow its own ETF lineup beyond its single offering. “We study a wide array of product opportunities all the time,” he said.

While I am all in favor of low or now fees, I also want to sound a word of caution. Just because something is free in the investment world, does not mean it’s appropriate.

When following trends in the market place, your main concern should be the momentum figures as shown in my weekly StatSheet. The higher the ranking, the more volatile the fund/ETF! You should make your selections based on your risk tolerance along with upward trending momentum numbers.

To select an ETF that has moved below its own long-term trend line, is showing mostly negative returns in all columns, but has no commission, should not be a candidate if you want to be long in the market.

If you go through the appropriate selection process, and you find two ETFs with identical features, and one is commission free, then by all means go ahead and select that one.

Otherwise, you are putting the cart before the horse, which will lead to investment choices that are not in tune with trend tracking principles.