As has been the meme for the past few weeks, an early rally gave way mid-day to a broad sell-off despite positive earnings reports, which simply could not stem the downward momentum. Several last minute attempts to reverse the tide failed, and the major indexes dove into close scoring the lows for the session.

25 of the 30 Dow components ended up in the red, joined by all 11 S&P sectors, the downside leader of which was Healthcare with -1.6%. Even energy, which previously had shown some strength due to the uncertainty in the Middle East, had no bullish support and ended flat.

For April, the returns for the major indexes were anything but noteworthy, but at least we eked out some green numbers. The Dow added 0.3%, as did the S&P 500, while the Nasdaq scored a gain of less than 0.1%

So far, more than 50% of the S&P’s companies have shown their report cards with 79% of them beating Wall Street’s expectations. That is a solid percentage, which makes it somewhat concerning that the markets are showing nothing but a lackluster attitude and reaction to good earnings.

Of course, let’s not forget the host of distractions that have placed a blanket of worry over Wall Street. I am talking about protectionism and geopolitics along with concerns that global economic growth might be slowing down further. Higher bond yields are not supporting the bullish equity theme, although over the past few trading session, we’ve seen the 10-year yield back off from its 3% level, which is widely recognized as a hindrance to further upswings in the equity market.

While our Trend Tracking Indexes (TTIs) are still in “Buy” mode, we now have reached a level where we reside in striking distance of a new “Sell” signal. I have no idea whether that event will materialize in May, but I am prepared to act should a signal be given. 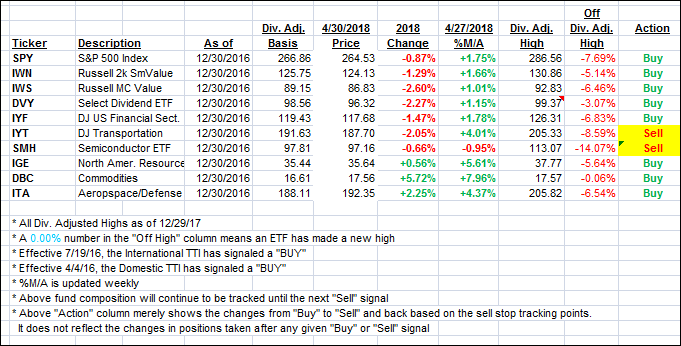 Our Trend Tracking Indexes (TTIs) dropped as the markets could not maintain their early positive bias.