The S&P 500 and the Dow rose to new record highs today, again. At the close, the S&P 500, Dow and Nasdaq were all up 0.4%. One of the major factors moving the markets higher today was that the ECB announced it is leaving interest rates unchanged and will continue to boost economic stimulus.

Europe benchmarks took huge, initial leaps of 3% or so on news of region-wide stimulus, but the gains eased considerably as the trading day wore on. The DAX of Germany ended 0.7% higher, the CAC 40 of France finished up 0.5% and Britain’s FTSE closed up 0.2%.

In local economic news, we received word today that U.S. workers’ productivity increased more rapidly than expected during Q3 as a solid jump in output offset a rise in hours worked. Labor productivity, or output per hours worked, rose at a 2% annual rate. Economists had expected a 1.1% increase.

It is only fitting to touch on precious metals, given the positive numbers we have seen on domestic growth of late. Gold and silver have been taking a beating in recent weeks. Gold spent much of 2014 trading around $1,250 an ounce. Now it trades below $1,145, which is its lowest level in over four years. Remember that Investors buy gold when they’re scared. Right now the U.S. economy continues to chug along, Ebola fears have faded, tensions with Russia have eased and Western countries believe they are containing ISIS.

8 of our 10 ETFs in the Spotlight gained today with 6 of them making new highs for the year. 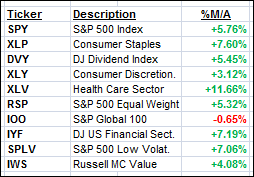 Our Trend Tracking Indexes (TTIs) both improved again with International one moving closer to its long-term trend line in an attempt to pierce through to the bullish side.

Here’s how we closed: