Markets took a hit today, a day after the Dow and S&P 500 closed near record highs. The Nasdaq took the largest hit, while the S&P and Dow dropped dropped by lesser percentages. Again, we see the Nasdaq, which is filled with those big momentum social media and tech stocks, showing the highest sensitivity to market volatilities.

Twitter (TWTR) shares led the plunge, officially hitting a new low as company insiders became eligible to sell their stock today as their “lock-up” period ended. Under federal securities law, company founders and executives must wait six months before selling any shares following an initial public offering. Netflix (NFLX), TripAdvisor (TRIP) and Amazon (AMZN) all took a beating as well today, while Target (TGT) shares continued to tumble following the exit of their CEO yesterday. In short, it was not a good day for the big momentum stocks that have captured so many headlines so far this year.

In more positive news, I saw a report today that the U.S. trade deficit narrowed in March as exports rose to the second highest level on record. Sales of aircraft, autos and farm goods were the big leaders. The deficit declined to $40.4 billion, down 3.6 percent from a revised February imbalance of $41.9 billion.

Our 10 ETFs in the Spotlight slipped with 8 of them remaining on the plus side YTD. 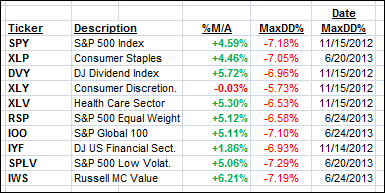 All of them, with the exception of XLY, are in “buy” mode, meaning their prices are above their respective long term trend lines by the percentage indicated (%M/A).

Our Trend Tracking Indexes (TTIs) pulled back with the indexes but remain above their respective long-term trend lines by the following percentages: