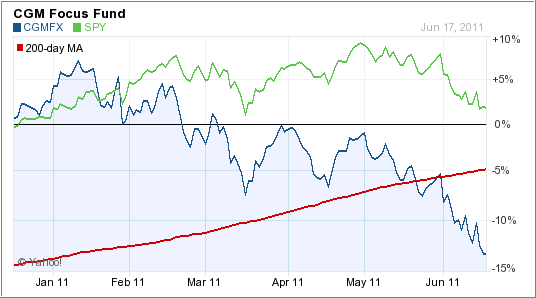 Here’s an interesting article on the subject of fund managers, which I have talked about on various occasions over the years. First, take a look at some highlights from “Berkowitz, Heebner and Miller in tight battle—for last place:”

Three famed stock-pickers having a dismal year so far, with big bets crapping out; still time to be right, however.

Bruce Berkowitz, Kenneth Heebner and Bill Miller, three of the best-known U.S. stock pickers, are competing for last place this year after their bets on an economic expansion backfired.

Funds run by Berkowitz of Fairholme Capital Management LLC, Heebner of Capital Growth Management LP and Miller of Legg Mason Inc. (LM) are the three worst performers among large diversified U.S. mutual funds in 2011, according to data from Chicago-based Morningstar Inc. The funds lost 11 percent to 12 percent through June 9, compared with a gain of 3.4 percent for the Standard & Poor’s 500 Index.

“People assume because certain managers have had good streaks that they are always going to be a step ahead of the market,” Russel Kinnel, director of mutual fund research at Morningstar, said in a telephone interview. “It never works out that way.”

The three managers tend to concentrate money in a small number of industries, said Kinnel, a strategy that can produce market-beating gains when the investments work out and large losses when they fail. Berkowitz, Morningstar’s fund manager of the decade, and Miller, known for beating the S&P 500 for 15 straight years through 2005, are wagering on a rebound in financial stocks. Heebner, manager of the best-performing diversified U.S. stock fund over a 10-year period until this year, was betting on automakers.

The two industries are the worst performers this year in the S&P 500 out of 24 groups. Bank stocks, as measured by the KBW Bank Index (BKX), fell 10 percent on concerns that the housing slump, litigation over mortgage bonds and foreclosures and new fee-crimping rules will depress bank earnings.

There is much more to this article, so please click on the link if the above interests you.

In the past, I have caught a lot of flak for saying that a fund manager is totally immaterial when it comes to the selection of mutual funds. I still stick to that statement.

When you follow trends in the market place, you want to be invested in those areas that are showing upward momentum via positive momentum numbers and solid advances above their long-term trend lines.

If a managed mutual fund is in tune with that idea, and moves up, it will automatically rank high on the M-Index as a market rebound materializes. If that same mutual fund does not perform, it will not rise in the ranking food chain.

What that means is that the fund manager had different expectations (see story above), as to the sectors that he expected to do well. Sometimes he wins, and sometimes he loses.

Consequently, as a trend follower, it should not matter as to who manages your mutual fund, because even seasoned pros can miss occasionally. If you follow a fund blindly, just because it is managed by a well known guy, you will have to live with the consequences.

However, even if you prefer investing in a fund run by a marquee manger, you can protect yourself against his misses by using trailing sell stops. That would have taken you out in a timely manner before serious portfolio damage had occurred.

To demonstrate, take a look at the above 6-months chart, which compares the widely held CGM Focus fund (CGMFX) against the S&P 500 (SPY). While trust is a wonderful thing, it can also be dangerous to your financial health if you don’t take precautionary measures.

Implementing a simple sell stop discipline, such as I recommend, would have given you ample warning that CGMFX was headed down the wrong path.