With the equity markets losing steam last week, ETFs around the cutline (trend line) were affected by increased volatility and surprising moves occurred.

As I pointed out, you need to look for momentum figures to not only be on the positive side but also show some stability by watching their movement for a week or so. Case in point is a notoriously volatile sector ETF like PBW, which dropped from a +16 position to -12. Again, if you own this ETF, let your 10% trailing sell stop be your guide as to when to exit.

Most of the moves to the upside happened in the bond area. No surprise here, as bonds usually rally when equities fizzle. Our holding in BND finally moved from -5 to +9, crossing its long term trend line for the first time since last December.

Noteworthy on the equity side was EWJ, which headed from +9 to +20, but is now closer to its trend line than last week due to overall weakness. EEB, ILF and TUR appeared on the chart and arrived there from a level above, also as a result of the market pullback.

There were a couple of opposing moves in the muni sector, which are surprising.

Again, both barely crossed their trend lines to the upside, so at this time these moves are not convincing. Of course, you can’t have a long and a short fund of the same asset class rallying at the same time. One of them will have head the other way; sooner or later.

Let’s look at the table: 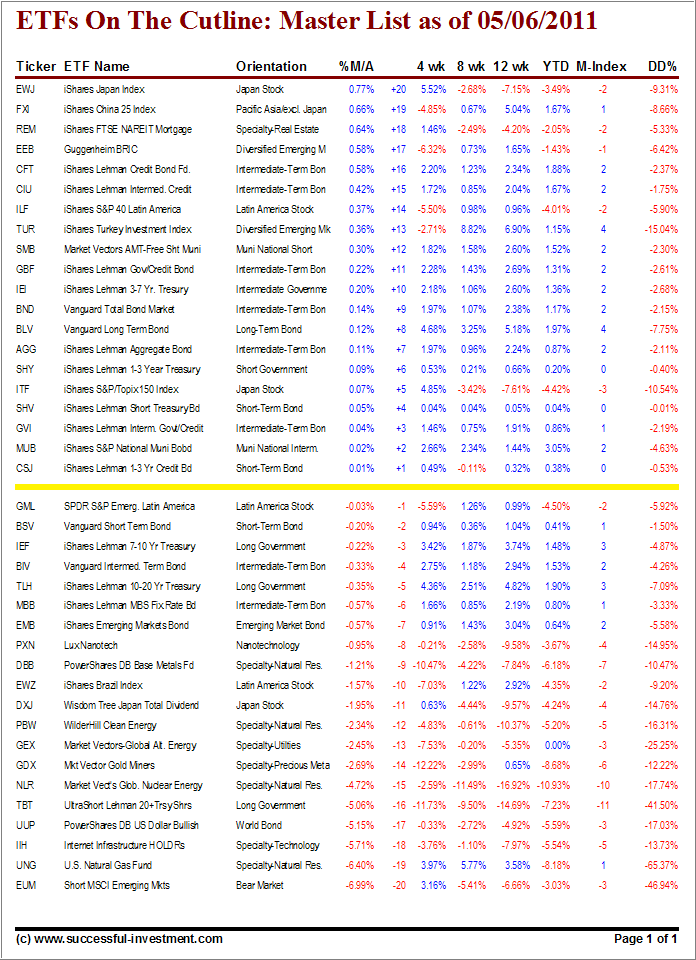 The market giveth and the market taketh away. That became very clear as UNG, which rallied the prior week, totally lost its direction and dropped from +13 to -19. Again, as I pointed out, the momentum numbers were not enticing to begin with, so last week’s rebound looks more like a dead cat bounce.

Bottom line is that there were no buying opportunities presented in this issue of the ETF Cutline report.