Currently, a clear long-term trend can’t be found anywhere among the major indexes. If you look at charts of the Dow Industrials, Transportations, Nasdaq, S&P 500 and others, they’re all in the process of forming large tops, which can have dire downside consequences, unless a breakout to the upside occurs.

Very typical of representing a market top is our Domestic Trend Tracking index (TTI). Take a look at this multi-year chart: 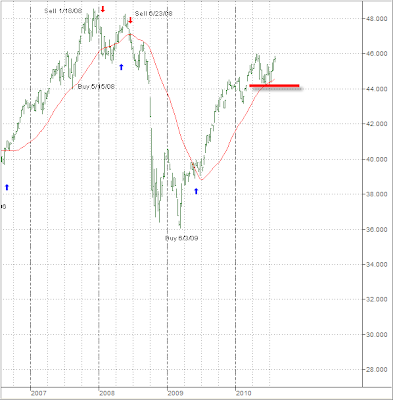 It’s apparent that the current topping formation is very similar to the one we’ve seen in 2008, although smaller in size. While the markets can churn sideways for a while longer, eventually, there are only two likely outcomes:

1. The markets will gather enough momentum and continue to rally by taking out the old high of 46.00, which means this topping formation from a technical point has been erased, or

2. Upward momentum deteriorates, prices sink and eventually a break to the downside occurs (through the red line), which puts us clearly back into bear market territory.

For most of this year, we have spent chasing the markets up from the 44 level in the above TTI to a high of 46, then back down and now back up. The more widely followed S&P 500 confirms this pattern as well as it remains in negative territory YTD.

As I have posted, it’s been one large sideways movement, which has proved to be frustrating for investors and advisors alike, no matter what your methodology has been.

Be aware that this type of market sloppiness is a sign of great uncertainty, as far as market direction is concerned, as opposing forces pretty much have cancelled each other out in a typical bull vs. bear tug-of-war.

This time will come to an end for sure; we just don’t know exactly the timing of it. When it does, you will recognize that a new trend has been set as pointed out above. Just be aware that it may not be in the direction you had hoped for, so remain prepared to deal with a bearish outcome if that is what the future has in store for us.