“Stupid Investment of the Week,” mentioned some good mutual funds with a bad ride in 2008. Here are some highlights:

In a few weeks the worst of the stock market’s meltdown will fall off the short-term performance charts. In its place will be all of the rally, and one-year performance numbers that in some cases look downright showy.

Yet investors will not soon forget the misery of 2008, and while they will be happier with the rebound numbers, they should look at the longer-term picture to see whether the ride they have been on is the one they signed up for. In many cases, it won’t be.

One mutual fund where that is clearly the case is Masters Select Equity Fund (MSEFX), an offering with a good reputation but a bad ride that should have investors wondering if they’ve gotten what they paid for or if they own the Stupid Investment of the Week.

MSEFX performed just like any other equity fund when the bear market of 2008 struck–it got clobbered. Let’s take a look comparing this fund to the S&P 500: 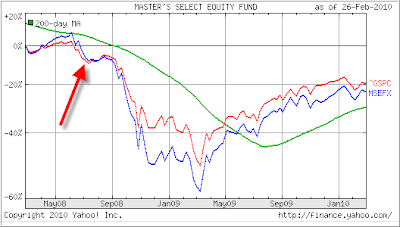 The red arrow shows our domestic sell signal of 6/23/08. If you followed this sell recommendation, it would not have mattered that this fund performed worse than its peers or the S&P 500; you would have been safely on the sidelines.

To me, the “Stupid Investment of the Week and the Decade” is holding any equity fund when the trend turns bearish and not whether a certain mutual fund “only” lost 40% while another one dropped 50%. This type of sick “outperformance” thinking permeates buy and hold where a “lesser” loser is considered a winner.

Disclosure: We have no holdings in the funds mentioned in the article.