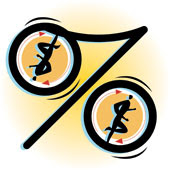 Reader Jim pointed to an article titled “Bracing for Higher Interest Rates.” Here are some highlights:

That was the unmistakable message from the Federal Reserve last week when it increased the discount rate, the rate it charges banks for borrowing reserves. Although the move came sooner than many expected, it was a healthy step toward more normal conditions and a sign the banking system is healing. The Fed stressed that the move doesn’t mean any imminent rise in the more important federal-funds rate. Despite the soothing words, it’s a clear warning that near-zero interest rates won’t last forever, and that the Fed is prepared to act when necessary to raise rates.

In the abstract, this can’t be a surprise. With short-term rates near zero, and even longer-term rates the lowest they’ve been in my lifetime, interest rates really couldn’t go much lower. But the question has always been one of timing. It’s not clear exactly what the Fed means when it says it won’t raise the federal-funds rate for an “extended time.” Is that three months? Six? The Fed itself may not know for sure. But we now know it won’t be an indefinite period. The tightening cycle has begun.

This has significant implications for investors, since markets anticipate events. Assuming we are in the very early stages of a credit-tightening cycle, investors need a whole new strategy for a world of rising interest rates.

So the trend is up for UUP, down for GLD and JNK. What you think?

Of course, the potential always exists that we end up in a “stagflation” environment, where economic growth stagnates and inflation rises along with interest rates. Articles like the above one make a good case, but that does not mean you need to adjust your investment strategy.

In Jim’s example, the major trend for UUP, JNK and GLD is up, and if you have positions wait until the trend turns before liquidating or, better yet, let your trailing sell stop be your guide as to when to get out. Wild guesses as to what may or may not be happening will inevitably lead to investment losses.

Disclosure: We currently have holdings in the funds discussed above.