A couple of weeks ago MarketWatch featured the “Stupid Investment of the Week.” Here are some highlights:

When an investment company fires a fund manager, the typical pitch to shareholders is that they should stick around because better days must be ahead.

But if management gave up on a manager it trusted — and who lost the job presumably due to lagging performance — it may well be time for shareholders to head for the exits, too, particularly if they can find another fund that appears to be better suited for the job.

That’s precisely why it’s time for investors to give up on Janus Worldwide, which recently fired its manager after five years of struggling. While the move may ultimately make the fund more competitive, for the time being it only succeeds in making it the Stupid Investment of the Week.

Stupid Investment of the Week highlights the flawed thinking and tainted characteristics that make a security less than ideal for average investors, and is written in the hope that spotlighting danger in one case will make it easier to sidestep trouble elsewhere.
…

Unlike most investments featured in this column, there hasn’t been much of a buying case for Janus Worldwide for years. Even after a 45% loss in 2008, the fund still has $1.7 billion in assets, presumably left there by investors hoping for a return to glory.

In the late 1990s, Janus Worldwide was a bull-market media darling. The fund was run by manager Helen Young Hayes, one of the hot-shot gunslingers picking growth stocks and transforming Janus from small operation to mutual-fund powerhouse. A $10,000 investment made in Worldwide in 1996 was worth more than $33,000 when the stock market peaked in 2000.

As went the market, however, so went Worldwide. Three straight years of bear-market losses, with the fund in the bottom quarter of its peer group, tarnished the reputation. Hayes retired in 2003, replaced by her assistant who, in turn, was replaced by Jason Yee in July of 2004.

Yee was a rising star at Janus and big things were expected, but they were never delivered. According to Morningstar, Worldwide never was able to outperform its peers in the world stock fund category under Yee. Over the last five years, the fund has an annualized average loss of 6.8% and ranks in the bottom 10% of its peer group. Not surprisingly, both Morningstar and Lipper give Worldwide below-average marks in virtually every way they measure and weigh funds.

In short, it has fallen and can’t get up.

There is no doubt that international funds got clobbered during this past bear market, but to me that was not necessarily a function of bad stock selections as it was a function of market direction. Let’s be realistic, when a bear market strikes, all funds will go down.

Let’s take a look at Janus Worldwide and compare it to one of the investment darlings, namely Fidelity Diversified: 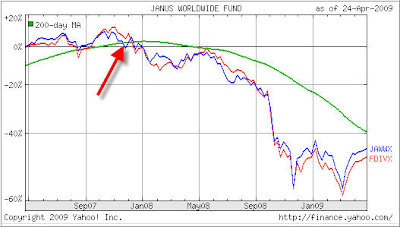 As you can see, they have mirrored each other pretty much over the past 2 years. That means no matter which fund you would have been invested in, the outcome of holding a bullish fund in a bearish scenario would have been the same: Heavy portfolio losses in the area of 50%.

That’s the issue the above article should have addressed. It’s not as important which fund you are invested in; it’s what you do when the market changes direction. Per our international Trend Tracking Index (TTI), which signaled a Sell on 11/13/2007 (see red arrow), you should not have held on to either fund.

This is why I keep harping on the same thing over and over when I read articles like the one above. It puts the cart before the horse by using whatever means to select a fund and then hope for the best.

To keep yourself out of trouble (translation: losing heavy), here’s the one-two-three punch in the investment selection process:

1. Determine the general trend of the market for the investment you are considering. If it’s bullish, go to #2; if it’s bearish, go to #3.

2. Select your investment from the choices available to you based on rising momentum numbers and establish an exit strategy after you have completed your purchases.

3. If the trend is bearish, don’t invest in a fund that prospers only in a bullish environment. Either stay on the sidelines or, if your risk profile permits, use an inverse fund/ETF to take advantage of a descending trend line.

Following these simple guidelines will put you in control of your investments and not the other way around. If you can become disciplined and follow a sell stop strategy, such as I recommend, you will at any given time know what your risk is as well as when to buy and when to sell.

Just making these adjustments to your approach of managing your portfolio will give you more peace of mind and let you sleep better at night.