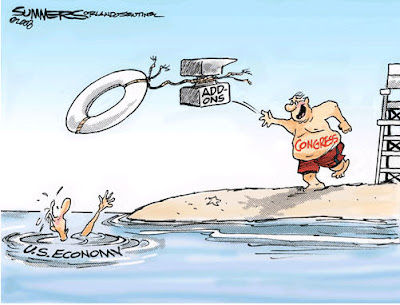 Lately, the most frequently asked question has been as to when inflation will be a threat again and how it will affect us. Mish at Global Economics referenced an article, which succinctly addressed this problem:

Will this printing create [price] inflation? This is dependent very much on what money will do next. If banks will not lend and banks sit on that cash forever and ever like the great depression because the risk is too high and the banks do not know if the lending will end up in good assets or bad assets, and because banks are in so many bad assets now they probably will not lend at all.

That is the observation that Murray Rothbard made, that during the Great Depression that banks have chosen not to lend because the risk of accumulating bad assets was far too high. So they were sitting on massive reserves. That is what is developing right now.

A good example is what happened in Japan in 2001-2002 where the Bank of Japan pumped 300% at one stage and lending continued to collapse. I expect similar things to happen here. If lending will not increase we can conclude this will not be inflationary.

I agree with the above. However, we’ve seen an incredible destruction of assets and wealth in general over the past 1-1/2 years, which now has been estimated at some $20 trillion. This wealth loss is far greater than the monetary expansion of the Fed and is, at least in theory, supposed to limit the effect of reflation for the time being.

In yesterday’s post, I made the argument that the dollar may not be destroyed to the degree many think because all industrialized nations are following the same theme of attempting to flood their economies with money via bailout and stimulus packages.

In other words, if we’re all doing the same thing, all currencies may be destroyed at about the same rate. If that happens, there is no longer a “reference” currency to measure the destruction against.

Same with inflation. If all major world economies are inflating at about the same rate, how will it affect the U.S. when there is no yardstick to measure against? This is where I have problems understanding the currency devaluation argument.

My conclusion is that we are entering a scenario unlike any in the past. Many comparisons have been made to the 1920s and 1930s. However, the world was not such an interconnected place as it is nowadays. Things that happened in the U.S. back then did not have an immediate effect on the rest of the world and vice versa.

I don’t think anyone has the answer or the ability to somewhat accurately forecast how these current circumstances will play out in the future. Relating these uncertainties to investing, I am more than ever convinced that being disciplined and following trends in the market place is the only way to survive in this potentially treacherous environment.