An early rally attempt driven by Apple reaching new all-time highs was rebuffed in a hurry, as worries surfaced that Trump may not be able to deliver on his promised tax cuts as quickly as had been assumed, an assumption that has been the reckless driver of the market in recent months.

Right now, it appears that nervousness is increasing ahead of the crucial vote on Thursday regarding the new healthcare plan. Depending on the news source, it’s become more questionable today as to whether Trump can muster enough votes to push the new legislation through. If he fails, his much hailed tax cuts may have to be put on the back burner and may not come to fruition until next year.

With Wall Street having more or less counted on tax cuts and the infrastructure plan, any disappointment will impact market direction, the beginning of which we may have witnessed today. The major indexes had their first 1% plus drop since October 11, as the D.C. drama intensified.

Not helping matters was the continued demise of the US currency with the dollar index dropping back below the widely watched 100 level and to near election lows. Bank stocks (JPM, GS, MS, BAC) got clobbered again and had their worst day since Brexit. The winner again was precious metals, which continued on their recent upward path. Is there more downside to come? The following graph attempts to shed some light on that question: 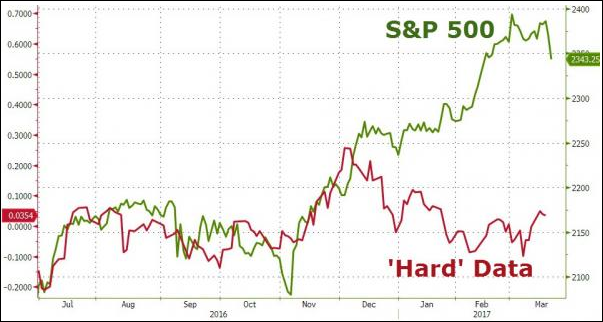 Year to date, here’s how the 2017 candidates have fared so far:

Our Trend Tracking Indexes (TTIs) came off their highs as the major indexes managed to slip more than 1%.