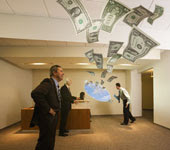 A few days ago, I was pondering President Bush’s announcement of setting up a summit meeting with some 20 heads of various countries to discuss the credit crisis and, I suppose, come up with ideas as to how to avoid a repetition of similar events in the future.

I tried to find some sensible reasoning as to why you would want to gather up a bunch of people who were clueless about the credit crisis, never saw it coming and, in some cases, still refused to acknowledge it until it was too obvious to ignore.

Mish at Global Economics wrote a great post titled “Bush to host summit of losers,” which I intended to write, but Mish simply beat me to it and probably did a better job than I would have. Here are some highlights:

Instead of holding a summit of losers, why not hold a summit for those who saw the mess coming and are far more likely to know what to do than those who did not see this mess coming.

There is one more gotcha to the summit of winners ideas. That problem is that a few of the people that did indeed see this crisis coming are proposing the same failed Keynesian policies that brought about this crisis in the first place.

Krugman and Roubini need to be excluded from the summit of winners.
…
At the top of my list of those who understand what the problem is and also what to do about it is Congressman Ron Paul. There are simply too many relevant articles by Ron Paul to list one of them as a highlight.
…
Marc Faber is second on my Winners List.

“The best thing to do is let the crisis burn itself out even if it means pain for some people. The problem is leverage, and the biggest hedge funds are Fannie Mae and Freddie Mac with leverage of 150-1, under the eyes of Congress and the SEC. Nobody did anything about it and then people go bitch about the short sellers. … And who supplies the leverage into the system? It’s called the Federal Reserve board!”
…
In spite of my differences with Schiff on inflation vs. deflation in the near future, I nominate Peter Schiff to my team of winners for what to do about this problem.
…
I also nominate Frank Shostak to my team of winners. Please consider this audio (see link in article) with Austrian Economist Frank Shostak on Mises.
…
If you saw this crisis coming, understand that it was the Fed, the SEC, and fractional reserve lending that caused this mess (as opposed to a lack of regulation), and recognize that the best thing to do in the immediate future is nothing, then add yourself to the winners list.

In terms of what to do about the current crisis my proposed winners conference could be concluded with one word “Nothing”.

However, it will take a plan and a timeframe to abolish the Fed, abolish fractional reserve lending, and return the world to a system of sound currencies backed by hard assets. I do not think that can happen overnight. How to accomplish that mission is what the economic conference should be about.

Instead, I fear we are going to see a conference of losers, sponsored by a loser, with losing solutions to the problem.

There you have it. Putting together a meeting of those qualified to talk about it is one of the simpler and obvious solutions which, unfortunately, is often ignored. Just as the credit crises accelerated a few weeks ago, news reports showed that none of the 400 top economists in this country had any input, but major decisions were proposed and made by those not necessarily qualified to make them.